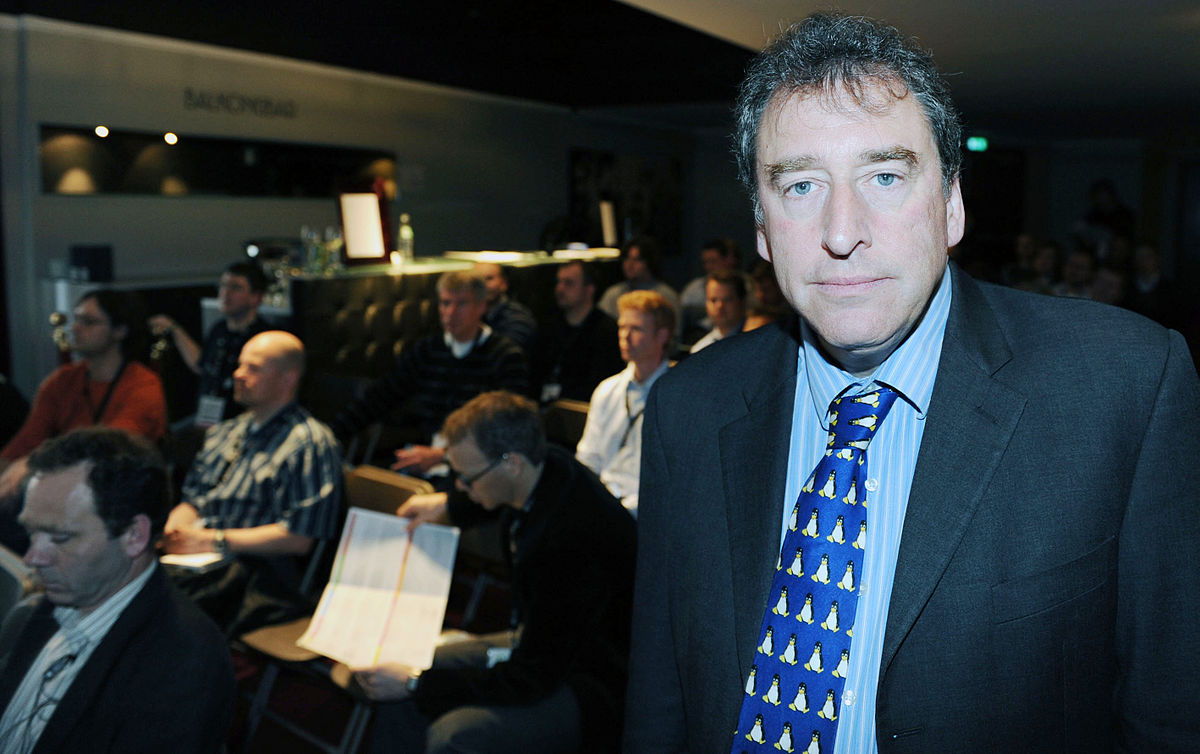 Open-source software (OSS) is computer software that is released under a license in which the copyright holder grants users the rights to use, study, change, and distribute the software and its source code to anyone and for any purpose. It may be developed in a collaborative public manner. The ability to examine the code facilitates public trust in the software.

Open-source software development can bring in diverse perspectives beyond those of a single company. A 2008 report by the Standish Group stated that adoption of open-source software models has resulted in savings of about $60 billion per year for consumers.

The Open Source Initiative (OSI) was formed in February 1998 by Eric Raymond and Bruce Perens (pictured above in 2009). With at least 20 years of evidence from case histories of closed software development versus open development already provided by the Internet developer community, the OSI presented the “open source” case to commercial businesses.

Proprietary software, also known as non-free software or closed-source software, is computer software for which the software’s publisher or another person reserves some licensing rights to use, modify, share modifications, or share the software, restricting user freedom with the software they lease. It is the opposite of open-source or free software.

Vendors typically limit the number of computers on which software can be used, and prohibit the user from installing the software on extra computers. Restricted use is sometimes enforced through a technical measure, such as product activation, a product key or serial number, a hardware key, or copy protection.

Vendors like Microsoft may also distribute versions that remove particular features, or versions which allow only certain fields of endeavor, such as non-commercial, educational, or non-profit use.

Open-source software projects are built and maintained by a network of volunteer programmers and are widely used in free as well as commercial products. Prime examples of open-source products are the Apache HTTP Server, the e-commerce platform osCommerce, internet browsers Mozilla Firefox and Chromium (the project where the vast majority of development of the freeware Google Chrome is done) and the full office suite LibreOffice. One of the most successful open-source products is the GNU/Linux operating system, an open-source Unix-like operating system, and its derivative Android, an operating system for mobile devices. In some industries, open-source software is the norm.

Since innovative companies no longer rely heavily on software sales, proprietary software has become less of a necessity. As such, things like open-source content management system—or CMS—deployments are becoming more commonplace. In 2009, the US White House switched its CMS system from a proprietary system to Drupal open source CMS. Further, companies like Novell (who traditionally sold software the old-fashioned way) continually debate the benefits of switching to open-source availability, having already switched part of the product offering to open source code. In this way, open-source software provides solutions to unique or specific problems. As such, it is reported that 98% of enterprise-level companies use open-source software offerings in some capacity.

With this market shift, more critical systems are beginning to rely on open-source offerings, allowing greater funding (such as US Department of Homeland Security grants) to help “hunt for security bugs.”

Proprietary source distributors have started to develop and contribute to the open-source community due to the market share shift, doing so by the need to reinvent their models in order to remain competitive.

Many advocates argue that open-source software is inherently safer because any person can view, edit, and change code. A study of the Linux source code has 0.17 bugs per 1000 lines of code while proprietary software generally scores 20–30 bugs per 1000 lines.